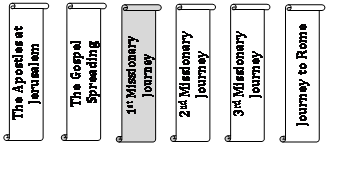 A. Barnabas and Saul Commissioned vs. 1-3

Paul, Barnabas and John Mark all begin this mission. (12:25)

"Antioch is in the extreme north of Pisidia. Here they found a synagogue and many proselytes. They met with great success in preaching the gospel, but the Jews stirred up a violent opposition against them, and they were obliged to leave the place. On his return, Paul again visited Antioch for the purpose of confirming the disciples (Acts14:21). It has been identified with the modern Yalobatch, lying to the east of Ephesus." [EASTON'S BIBLE DICTIONARY]

Acts 15:12—Then all the multitude kept silence, and gave audience to Barnabas and Paul, declaring what miracles and wonders God had wrought among the Gentiles by them.

God willed this meeting because of their wrong thinking and to settle any disputes later.

Galatians 2:2—And I went up by revelation, and communicated unto them that gospel which I preach among the Gentiles, but privately to them which were of reputation, lest by any means I should run, or had run, in vain.

B. The Council's Letter to Gentile Believers vs. 22-35