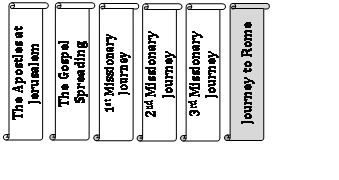 After completing his Third missionary journey, Paul begins a different kind of missionary journey. This journey although it is begun by Paul's own free choice, is marked by Paul's bonds. Even though he is under Roman custody and arrest, God uses Paul mightily during this period to the glory of God. It is because of the great testimony Paul lives during this period of his life, many call it his "Fourth Missionary Journey."

Paul's journey to Rome doesn't officially begin until Acts 27, but 21:15-26:32 are important steps leading to the famous voyage to Italy. In these passages, we see time and time again where Paul had opportunity to avoid personal loss and trouble, but he chose to be a testimony for Christ instead. His ultimate vision to go to Rome was that he might preach Christ there, as well. (Romans 1:8-15) 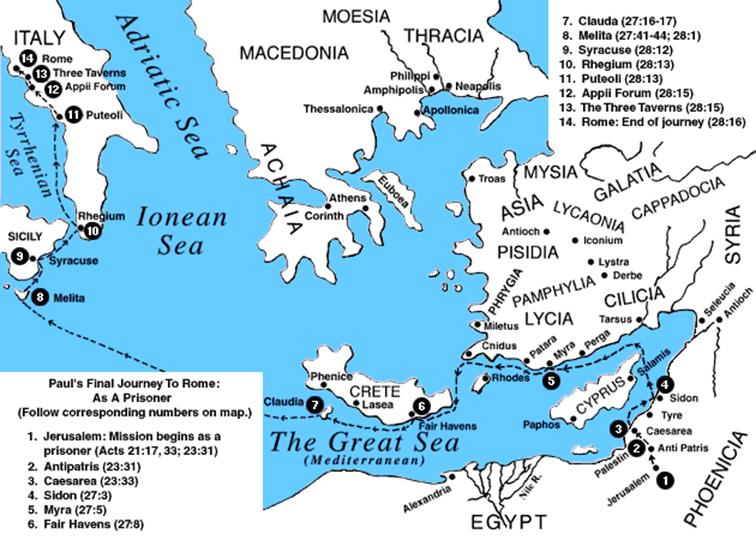 A. Paul Before Felix at Caesarea vs. 1-9

A. Paul Defends Himself Before Agrippa vs. 1-11

v. 32 Some appealed to Caesar just as Paul did.

1. Some were condemned to gladiatorial shows of the Roman arena to feed the immoral and violent cravings of the general public.

2. Believer's are counted among the worthless, violators, useless, prisoners outcast of society.

2. From Sidon along the Coast of Cilicia to Myra

3. From Myra along the coast of Cnidus, from thence southwest past Salome to Fair Havens

1. The ship was broken into 2 pieces

3. They all escaped to land safely

Paul the prisoner is the hero of the voyage and shipwreck, a wonderful example of God's providential care even though they didn't pay attention to the warning Paul was giving them. This was God's way of helping them to know He knows all things. (John 15:15)

Ro 1:10 Making request, if by any means now at length I might have a prosperous journey by the will of God to come unto you.

One of the most dramatic fascinating scenes imaginable; the detail given here on shipping and a shipwreck in the ancient world is one of the most graphic in all literature. At the same time, it is a picture of a believer's great trust and of God's great care. As such it is a challenging lesson for every believer to trust God through all the trials of life, even through the most terrifying trials. Like Paul we must live through the trials and troubles of life.

Paul and Jonah faced the same type of storm in the same sea, but two different motives, two different experiences and two different outcomes. Paul, a prisoner was aimlessly sailing for fourteen days through a terrifying storm, hungry, shipwrecked, cold, snake bitten, thought of as a murderer and stranded on the Island called Melita.

1. People of the Island build a fire and let the ship's crew warm themselves

2. A viper fastens himself onto Paul's hand and Paul shakes it into the fire

3. Many people on the island are healed

4. They depart from the island after three months

4. From Puteoli through Appii Forum and Three Taverns to Rome

Paul stays two years at Rome in his own hired house (though under guard) preaching and teaching the Lord Jesus with all confidence.

See Addendum, Chart 3 for a list of some "places" in the book of Acts.