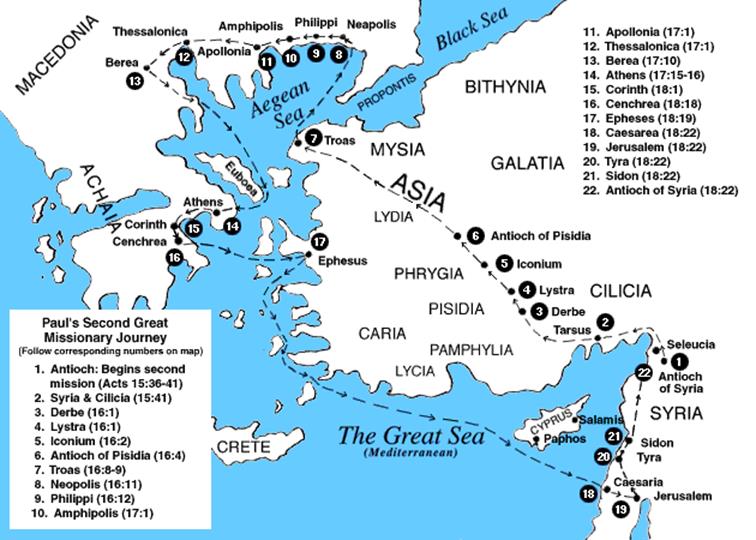 v. 36 "Paul said let us go again" "See how they do". This marks the beginning of Paul's 2nd Missionary Journey. They depart from Antioch to Syria and Cilicia.

Paul and Barnabas determined to go, but a sharp contention arose between them. John Mark was Barnabas' nephew and some partiality might be present in this dispute. A year before, John Mark had abandoned the missionary troupe for some unknown reason. Whatever John Mark's reason for leaving the group was it sorely displeased Paul, but did not seem to bother Barnabas. Perhaps John Mark wanted to go to Jerusalem to visit his mother and even see Peter or it is also possible that John Mark was discouraged with the trip and did not have the stamina to finish it out.

Barnabas took John Mark to Cyprus with him. Paul took Silas with him through Syria and Cilicia confirming the churches. (Personal conflicts are often harder to deal with than doctrinal differences.)

From Cilicia they journey to Derbe and Lystra. Lystra is where Paul was stoned to death in Acts 14:19. It was important to Paul to witness and encourage the Believers there especially because he had left them in the midst of such conflict during his first journey.

At Iconium young Timothy joins the mission troop. Timothy had a good reputation even though his home was shared by a devout Christian mother and a Greek father.

B. Paul Delivers the Papers from Jerusalem vs. 4-5

The 'decrees' were the judgments made by the Apostolic council at Jerusalem (15:1-35) primarily concerning the ill-advised circumcision of Gentiles. (Despite this fact, Paul still circumcised Timothy for their sakes. v. 3. Consider also, I Cor. 8:7-13. )

Paul is learning to follow the leading of the Spirit. After being forbidden to preach in Asia by the Holy Ghost (v. 6), Paul is given the vision of the Macedonian call (A man saying "Come over and help us") Acts 16:9.

Lydia's conversion was a very important part of Paul's ministry.

Acts 16: 10 - 15 the Lord had called us for to preach the gospel unto them. One of those listening was a woman from the city of Thyatira named Lydia, a seller of purple. She was a worshipper of God. The Lord opened her heart to respond to the Gospel.

Lydia was a "a seller of purple" ( dealer in purple cloth) and so she probably would be a wealthy and well known person in the city of Thyatira. Women in the times of Jesus were not given the same kind of respect and status in society as men. Women were often considered as second class citizen. They were allowed to have bare minimum education and their role was limited to the chores of the home and children.

Lydia had an education and skill, she also possessed strength and determination to work in a male dominated society. She was an influential person in her family. "she was baptized, and her household"- "she besought us saying, If ye have judged me to be faithful to the Lord, come into my house, and abide there"

Purple cloth was valuable and expensive, it was claimed to be worth its weight in silver. It was usually worn as a sign of nobility or royalty. (i.e., mockery of Christ in Matt. 27:28 "scarlet"=faded purple.)

Lydia was a woman of prayer as she met Paul at the place of prayer and she was also eager to learn from Paul, a worshipper of God (v.14). She received the gospel with an open heart. After receiving the message, Lydia responded by getting baptized. She constrained them to abide in her home. She was a faithful and hospitable woman. Ac 16:40 And they went out of the prison, and entered into the house of Lydia: and when they had seen the brethren, they comforted them, and departed.

The following is a brief outline of these verses:

2. Paul and Silas beaten and cast into prison v. 23

3. Paul and Silas sing and praise at the midnight hour. v. 25

A. The Uproar in Thessalonica vs. 1-9

1. Three days reasoning out of the Scripture of the risen Christ. vs. 2,3

2. Some Jews believed and a great multitude of Greeks believed. v. 4

2. Timothy and Silas stay at Berea while they sent Paul to Athens

1. Paul's spirit stirred because of the idolatry 17:16

v. 18—Then certain philosophers of the Epicureans, and of the Stoicks, encountered him. And some said, What will this babbler say? other some, He seemeth to be a setter forth of strange gods: because he preached unto them Jesus, and the resurrection.

2. The philosophers of the Epicureans brought Paul to Areopagus v. 19

3. Silas and Timothy came to Corinth from Macedonia and helped Paul testify. v. 5

Landed at Caesarea and went to Jerusalem